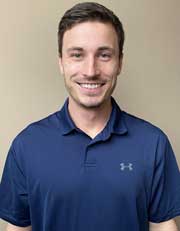 Quinn graduated from Minnesota State University where he played collegiate baseball while earning his Exercise Science degree. After school, he also obtained his Certified Strength and Conditioning Specialist through the National Strength and Conditioning Association. Following graduation, he continued his studies at Centerpoint Massage and Shiatsu Therapy School and Clinic, where he pursued a diploma in Therapeutic Massage. Quinn specializes in trigger point therapy, deep tissue and sports massage. His goal is to help people feel and function better, utilizing the benefits of massage and by taking an individualized approach to each session.

Quinn is from Joliet, Illinois and grew up playing baseball. He was a pitcher at North Iowa Area Community College and then at Minnesota State University-Mankato. He won a regional championship at each school, and pitched in the NJCAA World Series in 2015. Through years of dealing with his own aches and pains from sport injuries, he understands and appreciates the benefits of massage in a therapeutic setting.

Quinn currently lives in Savage with his wife, Kailee, and their German Wiredhaired Pointer, River. When he is not at the office he enjoys spending time outdoors. You’ll likely find him at the golf course, rooting for the Chicago Cubs, playing baseball for the Northfield Knights, or at one of River’s sporting events.